The Prince of Wales Check

The Prince of Wales check is one of my favourite fabrics to work with. It is quintessentially British and creates a timeless style that will be enjoyed and treasured for a lifetime. But where did this iconic fabric originate? There are lots of theories, however, a trusted theory is that the origin of this fabric dates back to the beginning of the nineteenth century. It was woven to warmly clothe the gamekeepers and made from the local sheep. The fabric normally occurred in browns, beiges & soft greens. It is said, that a group of English landowners emigrated up to Scotland, however, when they arrived, they were told that they were not allowed to wear the same designs as the local clans. So, they started wearing the “glenurqhart plaid”, the name of a valley in Inverness Shire.

As time passed it got shortened to “glen plaid”. The practical, yet elegant look was then adopted by The Prince of Wales, Edward V11, oldest son of Queen Victoria and Prince Albert. He wore it when he was in Scotland hunting and shooting. This is the reason we now use the name “Prince of Wales Check”. The fabric gained its notoriety when it was worn by his son Edward V111, who had an extensive wardrobe and became a style icon of the time.

I love giving it a modern twist way when creating pieces for the Harris Rae Collection. The capes are warm, yet easy to wear and style while the skirts and tops add an element of class to even the most simple of outfits. Not only does this fabric hold a lovely place in history, but it is also an immensely practical choice- it looks equally as great in the office or out for brunch as it does at a sporting event. 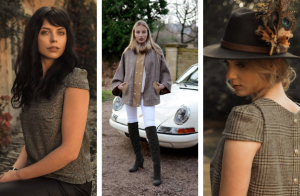